As you may have surmised from an earlier post where I added an SS-64 CTCSS encoder to a 2m radio, I already own a Kenwood TR-9000.  In fact, I have the complete station which includes the radio itself, as well as the matching SP-120 speaker, PS-20 power supply, and BO-9 base "shelf".  Here is a stock picture of this setup:

This is an absolutely awesome all-mode 2m VHF radio.  It can do Wide-Band FM, Narrow-Band, USB, LSB, and CW.  With the addition of the SS-64, it can also generate CTCSS tones to access repeaters.  The radio that I'm looking for is almost identical to this one, except it has a green display and uses UHF (70cm) frequencies.  Here is a closeup that I found online of that radio:

Ideally,  I would like to get the same complete station as above.  I think that it would be awesome to have a matched set of these radios.

The reason that I'm trying to acquire the aforementioned UHF radio is that I want to get into working other stations via Amateur Radio satellites.  Operating via this mode requires you to transmit on one frequency (called the uplink frequency) and receive on a different frequency (call downlink).  So you can see why I either need two radios, or one radio that is dual-band.  I could go the dual-band route, but I have to be honest, I have fallen in love with this awesome little TR-9000 and would love to use it for this purpose as well as 2m DX and chit-chatting on local repeaters.

There are several ham radio satellites in orbit, which always serves to amaze non-hams, as well as a ham radio installation on the International Space Station.  The station on the ISS sometimes acts like the other satellites, allowing you to talk to other Earth-based operators, and sometime operates as a normal ham station, allowing you to talk to the astronauts on the station itself.  How cool is that?!

Here is a diagram of one of the amateur radio satellites currently in orbit.  It is called Delfi-C3 (DO-64).  It was launched a few years ago by the Delft University of Technology in the Netherlands as a student research project: 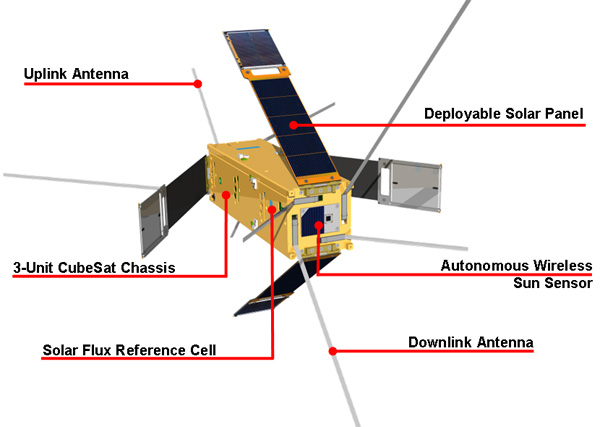 So, if you have one of these radios that you would like to part with at an even close to reasonable price, please let me know and maybe we can work something out!

Richard, KK4JDO
Posted by He who shall not be named at 3:58 PM